Who were Syed Rizwan Farook and Tashfeen Malik? Was Farook a good ole ‘Murrican boy from the Midwest? Was Malik a devout Muslim from Pakistan? Were they radicalized? If so, how? Were they terrorists? If so, why? There are more unanswered questions. Did the two ever meet? If not, how did Malik get a K-1 Fiancé(e) Visa which requires a face to face meet up? Were they married in Saudi Arabia? If so, how did Malik get classed as a fiancée? Were they ever in Saudi Arabia at the same time? Did Malik submit a Saudi police report, since she had lived there for at least 6 months over the age of 16, another K-1 visa requirement. I am an immigration attorney and I find the entire matter incomprehensible. No one seems to know much about anything. News reports from the mainstream media change … END_OF_DOCUMENT_TOKEN_TO_BE_REPLACED 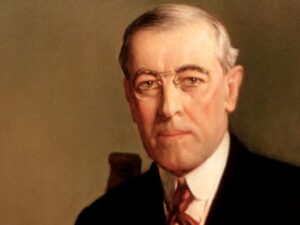 The Beginning.  “I come from the South and I know what war is, for I have seen its terrible wreckage and ruin. It is easy for me as President to declare war. I do not have to fight, and neither do the gentlemen on the Hill who now clamor for it. It is some poor farmer’s boy, or the son of some poor widow – who will have to do the fighting and dying.”  Woodrow Wilson, President of the United States, 1913-1921. Woodrow Wilson So much for politicians’ lies. Here’s the reality.  In July 1918, Peace-Loving Democrat Woodrow Wilson intervened in what was becoming the U.S.S.R.—against the Bolsheviks.  He marched 13,000 U.S. soldiers into the country:  5,000 men to Archangel and 8,000 to Vladivostok.  His intent?  To support the 70,000 fighting men of the Czechoslovak Legion, former … END_OF_DOCUMENT_TOKEN_TO_BE_REPLACED

This article first appeared in the American Herald Tribune, a publication twice shut down by the US government Zionist Noses.  According to the September 12, 2019  edition of the American political journal POLITICO, Israel "likely" placed cell phone surveillance devices around the White House and other "sensitive locations" in Washington, D.C.  The publication based it's statement on three, unnamed, former senior U.S. officials with knowledge of the matter.  (The story, however, first broke in June 2018 in a variety of news outlets which noted that the devices, called "sting rays", had been detected the previous year.) Sting rays are not fish but are, as Politico described them, devices "which mimic regular cell towers to fool cell phones into giving them their locations and identity … END_OF_DOCUMENT_TOKEN_TO_BE_REPLACED

Sigal Pearl Mandelker This article first appeared in the American Herald Tribune, a publication twice shut down by the U.S. government. Puppets? There are puppets in the theater and there are puppets in politics. Here is one tale of a Zionist puppet in the U.S. government. Where she came from, we know. Where she is now, we know. How she got there, we don't know. Did she have a godfather, did she have a rabbi, did she have a puppet master? We don't know. What we do know is that she moved very quickly and very smoothly through very sensitive areas in the American government. Sigal Pearl Mandelker is currently Undersecretary of the U.S. Treasury for Terrorism and Financial Intelligence. This position oversees, inter alia, the Office of Foreign Assets Control (OFAC) and the Financial … END_OF_DOCUMENT_TOKEN_TO_BE_REPLACED

The Beginning.  Being ‘satiably curious like the Elephant’s Child, I began to wonder about the Russian police action in the Ukraine.  The film V for Vendetta noted that it’s the government’s job to manufacture the news while it’s the media’s job to report it.  Or, as noted musician and political thinker Gilad Atzmon recently commented, we read the 4th Estate’s comments to learn what is not happening. For example, The Washington Post daily fills its pages with lots of ink about the failed Russian “invasion” of the Ukraine.  Russian armed forces have run out of men and materiel.  Its officers are being assassinated by valiant Ukrainian soldiers.  The entire world reviles the brutal baby killers and mass murderers of the Russian Federation. That’s one reality. Another is … END_OF_DOCUMENT_TOKEN_TO_BE_REPLACED

This was originally published in the American Herald Tribune, now shut down by the US government.   On February 15, 2019, The Military Times reported that U.S. forces occupying Syria, along with some of their "allies" were holding about 1,000 ISIS fighters. With Syria becoming unified under its legitimate government, the question now is:  What do we do with the terrorists? Release them? Imprison them? Send them home to one of the dozen or so countries that contributed them?   Pack them off to Guantanamo Bay, as one U.S. Senator, Tom Cotton (R-Kan.), suggested? The Past Isn't Past.   In the American Herald Tribune of February 1, 2019, C.J. Werleman asked "Could ISIS be the United States’ next ally in its war against the Taliban and other insurgent groups?" Citing Taliban … END_OF_DOCUMENT_TOKEN_TO_BE_REPLACED