As told to us by a Reliable Source
J. Michael Springmann 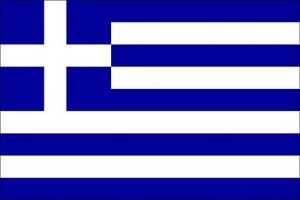 As the author noted in Goodbye, Europe? Hello, Chaos? Merkel’s Migrant Bomb, Greece “has been the main focus for migrants. Swarming out of Turkey, thousands of settlers made for the Hellene islands. In January and February of 2016 alone, more than 120,000 alleged asylum seekers poured into the Peloponnese and nearby isles…”
As soon as the tsunami started in 2015, mirabile dictu, newly-invented NGOs “suddenly” appeared on Lesvos, Chios, Kos, and other Greek islands. These mysterious organizations then did something entirely inexplicable: they immediately dismissed all the aid workers who had been helping the genuine refugees. Moreover, almost NONE of these NGOs had Arabic or French speakers on staff. (N.B., French is a tongue widely used in the Middle East.) Yet, all spoke English, a language which only educated people in Southwest Asia understand.
Goodbye, Europe? Hello, Chaos? frequently alludes to questionable outside forces helping to promote the migrant wave. The book discusses involvement of the European Union (EU), Germany, and Israel, among others. Our interlocutor added some more pieces to the jigsaw puzzle, helping add some clarity to the picture.

In Greece, the start of the migrant flood coincided with the election of Alexis Tsipras as Greek prime minister in January 2015. A man who had campaigned on Greek sovereignty and resistance to outside pressure, Tsipras acceded to the harsh economic austerity measures which the EU, Germany, and the International Monetary Fund laid down in July 2015. This was followed by, our interlocutor said, a U.S.-imposed Status of Forces Agreement (SOFA) with Israel. According to the Jerusalem Post, the SOFA ” offers legal defense to both militaries while training in the other’s country.” Voltaire.net noted that Greece has a similar arrangement with only one other country, the United States. As the author was told, this threw 70 years of Greek support for Palestinians and that country’s status as a trusted 3rd party in the Middle East-North Africa region (MENA) out the window. Israel has been training in Cyprus, most likely the part which Greek Cypriots control. Additionally, our contact said the Israeli air force immediately took over the Kasteli air force base in Crete. The Jerusalem Post wrote that Israeli warplanes, in a test, staged mock attacks against the Russian S-300 anti-missile system installed on the Greek island of Crete. Moreover, the author was told, Greek navy ships are now under German control and mostly lie idle in harbor, while NATO and Frontex vessels (European border and coast guard agency) cruise Hellenic waters. Deutsche Welle, the German international broadcaster, reports that German “humanitarian” vessels help bring more migrants into Europe. Isn’t there a link?

How Do The Migrants Make It?

On Lesvos, one of the two or three beaches they regularly land on, is close to our contact’s house. Nearly every night (it was most often night) boats full of aliens would arrive, everyone would disembark, and then destroy the boats, rendering them “shipwrecked” under the law of the sea. After changing clothes, the migrants would follow their mobile phone instructions and march into Mytilini port. No one had to give directions, they knew the way. Despite the tragic photos circulated by the media at the time, most of these “refugees”/migrants looked healthy, were fit, and were even well-dressed. (Meanwhile, enterprising old men waited on the beach to collect the abandoned engines and, in some cases, the inflatables, for re-sale. Greece is now flooded with powerful outboard engines.) 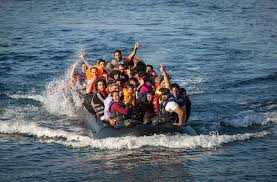 WHO provided this endless supply of engines? This endless supply of inflatables? (now in six figures). NOT “smugglers” because smugglers return WITH their boats.
Moreover, why is Greece regularly castigated for keeping the migrants in tents at “hot spots”. (These are, according to Human Rights Watch, violence-prone “centers…[originally] established for the reception, identification, and processing of asylum seekers and migrants.”) The Greek government, our interlocutor commented, makes no protest and takes the abuse like a “good bunny”. In fact, the hot spots are closed NGO-territory-only and the Greek government, including police and firemen, cannot enter unless invited. It is the wealthy, fake NGOs that keep migrants in worthless tents, eating disgusting meals at €7 (about US$8.50) a meal, while Greek street charities (particularly the Orthodox church) dish out healthy, fresh meals with a liter of water per person at €0.35 cents (US$0.40) a serving. (It was clear from the start that a lot of EU people and businesses – not necessarily Greek – have made a fortune from this, at the expense of EU taxpayers.) 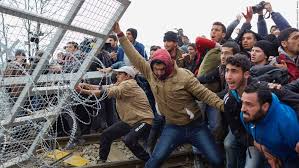 And does child and organ trafficking take place at these camps? So many children are unaccounted for, and there is no way for anyone to monitor boats going in and out of the camps.
Another question: would a parent, surviving in a Turkish refugee camp, send an 8-year old child off to Europe ALONE “in hope of a better life”? (This is the shopworn story told in Europe and the U.S.) Well, as our contact said, “I am a parent. My answer to that is ‘Never! We stick together! Ok…some parents may have sold these children at their point of origin, but….. Greeks and MENA people are fanatically family-minded.'”

Continuing, our interlocutor analyzed Germany’s internal politics and delved into the vast sums of money going to the migrants, raising more questions.
Thoroughly drubbed in last year’s elections, to save themselves politically, German chancellor Merkel’s CDU and the Socialist Party of Germany (SPD), headed by Martin Shulz, have announced that Germany’s rejected migrants will be sent back to their point-of-origin, such as Greece and Italy, thus reviving the Dublin Treaty. (Under the Dublin accords, asylum-seekers must apply for that status in the first EU country reached.) Our source noted that, despite EU claims, until last year Greece received no money for the migrants. (After these are released from the “hot spots”, they go to Greek army barracks where they are housed in [personally-observed]spare but humane and well organized conditions.). Now, our contact asserts that Greece has received several million Euros to house migrants rent-free in fully equipped and furnished apartments in Athens, Thessaloniki, and elsewhere around the country.
One of these apartments is in our interlocutor’s building, in a “good” part of central Athens, next to the Hilton. The flat is larger than our contact’s and has everything: a washing machine, air conditioning, etc. Utilities are paid for. Medical care is free. Food is delivered twice weekly from UNRWA, plus a small sum of spending money (which UNRWA always tries to make smaller). Supposedly these are temporary accommodations, just for three months, but the last group spent 10 months there before decamping for Thessaloniki where they found jobs. (WHAT jobs? At what pay?) And an additional question, how is the UN Relief and Works Agency, tied to Palestinian aid, involved in this?
This is at a time when half of Greek families are surviving on one grandparent’s pension, more than half have no access to medical care, when many Greeks have no electricity, and too many are homeless. Half have no jobs (with 67% of the youth being unemployed). The old economy overwhelmingly consisted of tiny private sector family businesses).
And, Finally, One More Question
The rape reports which started coming out of Germany and Sweden during the past years puzzled most Greeks because – except for a very few incidents – NOTHING like that happened there. So it was only now, this past Christmas, that in Lesvos these things began taking place.
As the author commented in Goodbye, Europe? Hello, Chaos?, migrant attacks on women appeared carefully coordinated, likely using their ubiquitous and expensive cell phones. Will that be repeated now in Greece?
Look at this.
Things seem to be replicating themselves. Here’s some news from Lesvos, our source said, from friends returning to Athens after Christmas holidays:
Around 100 migrants were arriving every day by boat, and sometimes several boats a day. Instead of landing on the usual beaches, they were arriving directly at the port of Mytilini because of the weather. Supposedly, smugglers brought them BUT, no “smugglers” were arrested, and the boats would return to Turkey right away.
All of the migrants were men: no women, no grannies, no children. They were all about 35-40 and spoke English. As they were led through the town, they would pop into cafes and bars and talk to the girls: “‘Hey beautiful, shall we drink something together?” without their minders stopping them. Three girls living in the city center said that every time they went out, they were being hit on.
Is this really post-traumatic stress disorder? Is it really a culture clash? Or is it an effort to change Europe’s way of life? Is this happening because journalists are not doing their job?
Our contact asked how NOT ONE journalist worldwide made even one tiny day trip to the Turkish side of the sea from mid-2015 onward….not one person in the whole world, it seemed, had even one drop of curiosity about the “smugglers”. It wasn’t as if the two-hour commuter ferry Ayvalik-Mytilini had stopped running. And, speaking of that ferry, that is how the real migrants before 2015 used to arrive, WITH their passports.

According to the U.S. Department of State, “Geoffrey R. Pyatt, a career member of the Foreign Service, class of Career Minister, was sworn in as the U.S. Ambassador to the Hellenic Republic in September 2016.
`He served as U.S. Ambassador to Ukraine from 2013-2016, receiving the State Department’s Robert Frasure Memorial Award in recognition of his commitment to peace and alleviation of human suffering in eastern Ukraine.”
The lack of peace and appearance of human suffering in the Ukraine came from the Obama Administration’s policies, formulated and implemented both by Pyatt and Victoria Nuland, former Assistant Secretary of State for European and Eurasian Affairs.
Is there a U.S. plan for Greece to match that for the Ukraine? 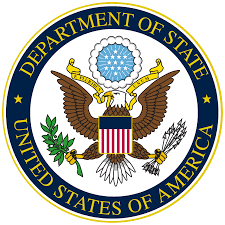