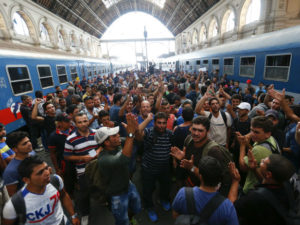 During the first week of November 2017, RT and later numerous British sources announced that Her Britannic Majesty’s Home Office (Interior Ministry) had “misplaced” some 56,000 foreigners liable for deportation – including convicted criminals and illegal immigrants. One woman intimately familiar with Europe’s studiously ignored wave of illicit aliens waggishly remarked, “they aren’t lost; they’re all here in Germany, riding the trains.”

What Hath Merkel Wrought? And Why?

And that’s Europe’s chief problem: the nations on the Continent, nearly all members of the European Union (EU), Germany in particular, still don’t recognize that the foreigners, those now present and with more still on the way, are a problem. Mutter der Nation Merkel invited the migrants there to “save” them from the American/Israeli Forever War against Arabs and Muslims. Please take note that German Chancellor Merkel did not, repeat not, attempt to stop that war. She has never spoken out against it. She has never demanded that refugee camps be set up in or near the violence-torn countries. She has never attempted to aid the economies of those wretched lands, except perhaps through German military expenditures for soldiers and airmen stationed in or near them.

But, Angela Merkel did want cheap labor to help German exports. She did want to change the cultural makeup of the country, helping wipe out German values. Look and think on that latter point, especially given Merkel’s remarks when she was an official of one-time East Germany, the German Democratic Republic. “If we reform the GDR, it won’t be in terms of the Federal Republic.” (Then, “West Germany”.)

As noted in Goodbye, Europe? Hello, Chaos?, the migrants are, to a large extent, not well educated, come from a culture differing in interpersonal behavior from Europeans, and often are not attuned to punctuality. Additionally, their religion is radically different from those of Germany and the rest of the EU.

What Does This Mean?

The German culture stems from the beliefs and values of its people. The role that these principles play are evident in a German’s everyday life. Here are a few of the key values that the Germans possess.

… a good education is very important to German societies. Not only do they have a deep respect for education, but credibility, social status, and the level of employment a person may reach depends on his educational achievement.

…Displaying politeness and courtesy are ways of showing respect. Boundaries are drawn through social distance, eye contact, touch, and facial expressions. Different types of relationships require different codes of behavior. Failing to follow these protocols is considered rude and may alienate those who are unaware of them.

…Germans pride themselves on their punctuality… Being late to an appointment disturbs their sense of order and is seen as rude… The German sense of “keeping to the schedule” can be seen in and out of the business world. For those who are virtually always on time, there are rarely acceptable excuses for tardiness or delays that may disturb the “schedule.”

German religion has gone through many changes throughout history. Yet, it continues to be a major part of Germans’ lives. The two most practiced religions are Lutheran Protestant (45%) and Roman Catholic (37%). (Source for foregoing: DePauw University. For more information and analysis on culture clashes between Germans and migrants, see: www.michaelspringmann .com and www.amazon.com/Goodbye-Europe-Hello-Chaos- Merkels/dp/0990926222/ref=tmm_pap_swatch_0?_encoding=UTF8&qid=1506524567&sr=8-1)

Mama Merkel paid the price for her arrogance and contempt for German culture. She and her right-wing party, the Christian Democratic Union (along with its ally, the Bavarian Christian Socialist Union), lost very badly in the General Election held September 24, 2017. Their percentage of the vote fell sharply, dropping from 41% of the polls in 2013 to barely 33% in 2017. (Normally, the shift of a few percentage points is a big issue.) They lost 63 seats in the Bundestag (parliament), The Alternative for Germany party, the only viable political group opposing migration, grabbed about 13% of the vote, gaining 94 seats, a radical change for a party founded in 2013.

Yet the Chancellor’s response reflected her inability to handle reality. She said that she would listen to those who voted for the Alternative for Germany, or AfD, and work to win them back “by solving problems, by taking up their worries, partly also their fears, but above all by good politics.” She didn’t say she would stop the conflicts creating the migrant wave or seek to damn the flood of aliens.

Frau Merkel seems to also ignore the great effect German generosity has in pulling migrants from all corners of the globe to the Federal Republic. According to The Local.de, “An asylum seeker arriving in Germany has the right to housing and up to €390 euros per month to cover food, clothing and other expenses.” (This is considerably better than US support of asylum seekers.) German Interior Minister Thomas de Maizière characterized this as a “siren call for migrants”. Additionally, “The benefits for refugees in Germany are quite high compared to other EU countries. This is part of the pull effect towards Germany,” de Maizière, a close ally of Chancellor Angela Merkel, said in an interview with the Rheinische Post regional daily. (Quoted in The Local.de, Sept4ember 10, 2017.)

So far, Merkel’s done nothing to change the Willkommenskultur (Welcome Culture). And more information about her failed policies and their dreadful consequences is coming to light.

Here’s but one example. On October 16, 2016, an Afghan migrant, Hussein Kavari, raped and drowned Maria Ladenburger, daughter of a high-ranking EU official. The Afghan attacker caught the young medical student as she was bicycling home from a party in the university city of Freiburg. One year later, more explosive news about Karvari came out. RT wrote on November 8, 2017 that Kavari, who claimed to be underage [and, presumably seeking mercy from the court] is really in his 20s and may be as old as 30. (He had kept a previously-extracted tooth that yielded up his true age.) More astonishingly, “The suspect arrived in Germany as an unaccompanied asylum-seeker in 2015, with no identity papers, and had been living with a Germany foster family since.” (When arrested, Kavari claimed he was only 17!)

Migrant Makeup and the Push for More

The “male and unaccompanied issue”, handled in Goodbye, Europe? Hello, Chaos?, is still a major problem in Germany, and becoming more complicated. According to The Local.de, “asylum seekers are more likely to be male than female, although the balance changes somewhat from year to year. In 2016 two in every three asylum seekers were male… Government figures show that two age groups are particularly likely to be asylum seekers in Germany. The first is young people aged between the ages of 18 and 30, of whom the large majority are male. The second group is very young children under the age of four. Almost one in every four asylum applications lodged this year have been on behalf of children under the age of four. By contrast children aged 4 to 6 made up only 3 percent of all applications.” (September 1, 2017.)

The Local.de went on to say in the same issue that 2016 was a record year for asylum applications: ” When hundreds of thousands of refugees arrived in the autumn of 2015 they didn’t all apply for asylum at once. Because there was already a long backlog with the immigration authorities, many waited until 2016.

That meant that last year smashed the record for asylum requests – 745,545 applications were lodged during the course of the year. 2015 was the second highest number of applications in German history, with 476,649 being made…”

Not recognizing the reasons for the 2017 electoral backlash against its policies (crashing to 20% of the vote, the worst in its post-war history), the German Socialist Party (SPD) has proposed alienating still more people. Touting the discredited idea that the only way to expand Germany’s population is by migration, Germany’s traditional working-class party believes that 250,000 more aliens should be brought to the country annually. The SPD proposes a point system that would enable additional people to qualify for German citizenship. Its draft law, the party notes, would not affect the rights of anyone seeking asylum in the country. (Cf. The Local.de November 7, 2017.)

Yet, there appears to be no real change from the German government’s crackdown on speech critical of migrants. In 2016, the Washington Post reported that “German authorities, meanwhile, have reached a deal with Facebook, Google and Twitter to get tougher on offensive content, with the outlets agreeing to apply domestic laws, rather than their own corporate policies, to reviews of posts.” (Perhaps that is why Twitter has refused to advertise Goodbye, Europe? and why Facebook does such a poor job of promoting that volume. The work disparages Europe’s, especially Germany’s, migrant policy. )

The Post also noted ” Critics call it the enforcement of political correctness, raising the question of what constitutes hate speech and sparking a national debate over free expression…Some Germans are questioning whether their online comments about migrant crimes [such as the 2015 New Year’s Eve attacks in Cologne] could be taken down, or whether they could be charged with incitement, for publicly pondering whether refugees could have been among the assailants.”

Also, “… the incidents have fed a strain of anger and suspicion here beyond the traditional migrant critics in the right wing. It’s not politically correct to say anything against migrants. We don’t have freedom of opinion anymore…tweeted a German user from Hanover going by the handle Pulvermann.”

Furthermore, ” Proponents are hailing the government effort as a way to foment respect while also controlling the most savage voices in society.” Yet, this is not going down as easily as Merkel and her people might wish. “…[E]ven leaders on the political left are questioning whether the bid to weed out hate is going too far. Stefan Körner, chairman of Germany’s liberal Pirate Party, argued that democracies ‘must be able to bear’ a measure of xenophobia. He condemned the government’s deal with social media outlets to get tougher on offensive speech, saying that ‘surely it will lead to too many rather than too few comments being blocked. This is creeping censorship, and we definitely don’t want that.’”

Even the media, the Post said, is censoring itself. “The surge of incendiary comments online has been so strong that one of Germany’s largest media outlets, Der Spiegel, disabled its readers’ comment function for articles related to refugees.”

Proponents of more controls on freedom of speech in Germany assert that uncontrolled speech about migrants causes violent crime against migrants, so the Post says. Perhaps, it’s the other way around. Failure to address an issue of major importance, an issue striking at the heart not only of the state but of its people encourages crime against migrants because the government is seen as working on behalf of aliens to the detriment of the citizenry.

CONCLUSION: The surge in European, especially German, hatred of the Right, particularly those groups opposing unrestricted migration, further demonstrates the failure of the Left. Much like the recent presidential election in the US, Europeans no longer accept polls that go against what they perceive as their interests. And that is why democracy is dying, not as the Washington Post claims on its masthead, in darkness, but in bright sunlight.