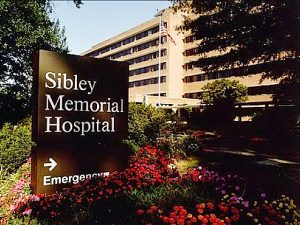 It was not the best of times. It was the worst of times. It was more than one trip to Sibley Hospital’s Emergency Room. And the questionable care provided. Here are two blood-chilling tales of low-tech medical care in a high-tech world.

One. In February 2016, the author, through an act of sheer stupidity, fell down the stairs on a weekend. Subsequently suffering excruciating back pain, he later drove to nearby Sibley Memorial Hospital on Loughboro Road in Northwest Washington. (Established in 1890, Sibley became a wholly-owned subsidiary of Baltimore-based Johns Hopkins Health System Corporation in 2010.)

Recounting his misadventure, this writer explained to Sibley’s emergency room staff the pain’s duration, location, and intensity. The attending emergency room physician asked questions, checked the author’s mobility, and ordered x-rays. She noted that the writer didn’t appear to have a concussion.

Treatment? Experiencing extreme dizziness during the x-rays, the author emphasized his discomfort and concern. The doctor took no notice of his complaints. She sent him home with a prescription for an extra-strength non-steroidal anti-inflammatory drug, like Ibuprofen. The physician suggested that if he felt no better, he should consult his own personal medico.

The ability to drive to the emergency room obviously indicated no real emergency and no need for attentive care.

The next day, a Monday, this author was still in great pain. Calling his own doctor, he obtained a quick appointment. There he learned that Sibley had told her he had broken a lumbar vertebra and was exceedingly fortunate that he had not become a paraplegic. She prescribed narcotics for the pain and suggested he look at kyphoplasty, Greek for gluing the broken bone together. This required a waiting period to see if the bone would heal normally.

Ignorance is not bliss. Livid, the author called Sibley and demanded to speak with the emergency room doctor who apparently couldn’t diagnose his situation. Emergency room staff insisted that the physician, whose name was on the discharge papers and prescription, didn’t work at the hospital. This writer then tried and failed to reach the head of the emergency department. When he sought help from the hospital administration, he was ignored. A complaint to the D.C. government brought no relief.

A week later, this writer became so dizzy he could not get out of bed. Calling the Bethesda-Chevy Chase Rescue Squad, he was taken back to Sibley. There, he was diagnosed with, and treated for, mirabile dictu, a concussion.

The author then spent the next six weeks watching really bad daytime TV and munching codeine pills. He then made an appointment with another Sibley doctor who breezily explained kyphoplasty, handed over a brochure about the process, and told him to call for an appointment.

Help at last. Following silent, enraged, obscene thoughts about Sibley staff, the author called a surgeon recommended by Georgetown University Hospital. He met with a young, highly-qualified doctor woman of Iranian ancestry. She carefully explained his situation, clarified the kyphoplasty procedure, and showed him an MRI of his back, things Sibley hadn’t done. She also assured the author that she would be using high-tech plastic cement, not Elmer’s Glue.

Once the procedure was done, the writer was out of the hospital the same day. The vertebra is now better and stronger than new.

Two. In mid-December 2018, the author, being careful, took a box of tax papers down to the basement. Then, in an instant, he found himself clutching both handrails and hanging upside down, with a foot in excruciating pain. Alone in the house, he knew that no one had pushed him or that no afreet (a djinn with an attitude) had emerged from his computer to trip him.

Once the pain had subsided, he crawled up the stairs and called the Rescue Squad. Again, the destination was Sibley. It was “nearby” and “had space”. Almost ready to countermand the Squad’s suggestion, this writer thought that the hospital couldn’t make any more mistakes.

Delay is not good for the soul–or body. He sat in the emergency room for a good four hours, before meeting a doctor, who was not an orthopedist. Then, more time went by before he was x-rayed and diagnosed with a broken foot. Apparently, bone doctors are not on staff on the weekends at Sibley. They evidently had to find one to do a telephone consultation about the injury. (Obviously, no one plays sports on Saturdays or Sundays in Washington, D.C.)

Why the delay? Sibley only knows. The emergency room wasn’t crowded and the only really important case with far greater precedence was one elderly man with chest pains.

Unhelpful help. Eventually, a staffer came by to wrap this writer’s foot in a soft cast. She wanted him to remove his jeans and put on paper scrub pants to wear home. She claimed that, otherwise, he couldn’t strip off his jeans once the cast was on. Apparently there were no scissors in the hospital to cut into the pants leg. And no grasp of the difficulty of removing shoes, socks and other garments without putting weight on both feet.

The best part of the scrub pants “idea” was that it was raining. While the author always enjoys impressing his neighbors with his sartorial splendor, wearing paper clothing that would dissolve in the downpour didn’t sound practicable. It also seemed somewhat risqué.

More to the point, a nurse provided a prescription for narcotic painkillers. The nurse knew the author couldn’t walk and the nearest pharmacy, not the hospital’s, was three blocks from his house. Following strong remonstrations, the nurse provided two Vicodin pills, TV Dr. House’s drug of choice.

Can it get worse? Months later, Sibley began sending $2.40 bills to the author. When queried about the charge, Sibley’s billing service asserted the pills were “self-administered medicine” and this writer’s insurance wouldn’t pay for them. Rather than waste money or additional time arguing with the billing bureaucrat, the author ignored the repeated mailings. Now, he’s learned that Sibley, the once-trusted hospital, has referred the staggering, inexplicably increased sum of $6.30 to a collection agency.

The Takeaway? Sibley Memorial Hospital displays an astonishing level of ignorance, arrogance, and incompetence. And, regrettably, this is typical of American medicine today. Adding to this foul brew is the parent, Johns Hopkins. Physicians have told the author that, since the Baltimore company acquired Sibley, the emphasis has been on profit rather than patient care.

The Cure? Besides overhauling Sibley’s emergency room and instituting periodic investigations of its competence? And improving the quality of medical school graduates? Universal Health Care. Something available in nearly all other countries save parts of Africa, the Middle East, and China. It’s absence here quite rightly staggers non-Americans. They can’t conceive of profits instead of care.