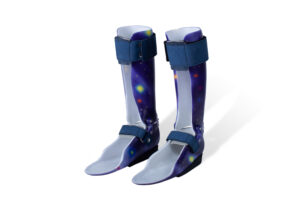 WHAT?  The Hanger Clinic is a producer of orthotic and prosthetic devices (artificial supports or braces for the limbs).  It has 800 offices in 47 States and the District of Columbia.  On its website it brags:  We serve patients in ways that build lifelong trust.  Nope.  The Maryland Orthotics and Prosthetics Center with various locations around Baltimore Maryland) is another such firm.  Its website asserts: We believe in forming friendships with patients and creating customized devices with superior fit and comfort.  Huh uh.  Gouterman Orthopedic Appliances is a third.  Located in Rockville, Md., its website claims …[W]e have the experience and knowledge in providing the most optimal orthoses to our valued patients.  Patients receive personalized attention throughout their treatment and recovery.  La, nein, nyet, non.

WHO? ME?  Yep.  Along with my charming smile, once-auburn hair, and eye color, I inherited something called Charcot-Marie-Tooth Disease (CMT).  While it has nothing to do with my choppers, being named for two Frenchmen and an Englishman who studied it in the 19th century, it is intimately connected to my physical well-being.  The malady causes the slow, progressive loss of muscle and muscle tone in the extremities.  Nerves activating the muscles lose their insulation, essentially shorting out and blocking commands to contract or loosen.  Imagine a switched-on, electric table lamp.  Now, take a knife and shave off the plastic or rubber on the wire to the mains socket.  The light goes dark.   That’s CMT in a nutshell—along with difficulty walking, balancing, and losing fine motor skills in the hands.  No picking up pennies from flat surfaces.  And finding major problems with U.S. government employment.

THE PROBLEM.  (1) In late summer 2019, MGUH’s physical therapy department referred me to the Hanger Clinic on 31st St. N.W. in Washington, D.C.  It supplies ankle-foot orthoses (AFOs), essentially half-boots that brace the lower legs and feet, compensating for the ravages of CMT.

Unfortunately for me, the Hanger Clinic couldn’t pad the footplates of the new orthoses—even though I showed them my old pair which, while comfortably cushioned, needed an upgrade due to loss of muscle.

Despite repeated visits, Hanger still couldn’t supply me with comfortable braces.  I returned their latest iteration on August 4, 2021 as being ill-fitting and dangerous to use.  And I got a receipt.

MEDICARE.  I then began contacting Medicare, which had paid astonishing sums for the unusable AFOs from Hanger.  Call after call got me nowhere.  Complaints by telephone and letter achieved nothing.  However, I was told by numerous staff members that orthotics suppliers are required to provide such durable medical equipment with a valid prescription, especially when given a receipt showing that the useless AFOs have been returned.  Additionally, in such cases, there was no time limit on getting new equipment.

After threatening a lawsuit for the value of Hanger’s worthless orthotics, the company sent me a letter stating that it had refunded the sums it had taken.  However, it didn’t know when Medicare had cashed its check.

Surprisingly, Medicare didn’t know either. On March 1, I spoke with Charlie Gonzalez there.  He told me he had no idea when or if Medicare had been reimbursed by Hanger.  He added that he might know in a month.

(2).  The Maryland Orthotics and Prosthetics Center, also recommended by MGUH, refused to make me a new pair of AFOs, insisting that Medicare only pays for new AFOs once every five years—and that I already had a pair from Hanger.

(3).  Diane, at Gouterman Orthopedic Appliances (which MGUH suggested) insisted that Hanger is a reputable company and that her firm would not provide me with AFOs since I already had a pair.  On instruction from Mr. Gouterman, the owner, she directed me to call the American Board of Orthotics and Prosthetics to recommend a supplier of the medical equipment I needed.

WORDS (AND TELEPHONE CALLS) FAIL ME.   I have complained to Medicare, to the Maryland Attorney General’s Office, and to the said American Board of Orthotics and Prosthetics.  With no result to date.

WHY?  Simple, dear Reader.  If I pay one of these orthotics makers for another pair of AFOs, enabling me to walk with less difficulty, they get $10,000 immediately.  If they bill Medicare, they would get $8,000 sometime during the next year.  Avarice, cupidity, and stupidity bring in the bucks.

SOLUTION.  Sue them all?  (I don’ have a money tree in my backyard or a printing press in my basement.)   Remove the politicians and bureaucraps masquerading as healthcare officials?  Replace them with competent administrators and knowledgeable medicos?  Establish a European-style healthcare system that provides preventive medicine and wellness programs for everyone, not just the few with enough money to pay for concierge care?

Not gonna happen.  Americans have been taught that they must pay for medical care and higher education themselves.  Anything else is socialism.